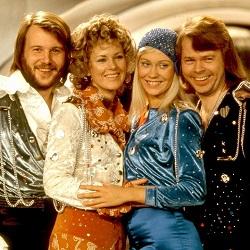 ABBA's Waterloo has been named the greatest Eurovision song of all time by BBC viewers.

BBC TV's Eurovision - Come Together saw the public vote for their favourites, on the night that this year's Eurovision Song Contest was due to take place. The 2020 competition, due to be held in Rotterdam, was cancelled in March amid the coronavirus pandemic.

The Swedish foursome won the Eurovision Song Contest in 1974 at The Dome in Brighton. The track, which topped the UK charts and set them on their way to fame, went on to sell nearly six million copies.

Speaking later on the night, ABBA's Bjorn Ulvaeus said he found it "hard to believe" that was where it began for them all those years ago.

The shortlist for the programme included Eurovision Song Contest classics from the likes of Brotherhood of Man, Dana International, Bucks Fizz, Conchita Wurst and Gina G but it was Agnetha, Anni-Frid (Frida), Benny and Bjorn who ultimately triumphed, with their musical metaphor about the joys of surrendering to love.