Well done to everyone who spotted the band in the opening scene of the BBC One Bafta award-winning “Happy Valley” on Tuesday (08/03/2016) evening. The scene was actually filmed back in 2015 on a rather dark, wet and windy December morning from 8.30am in Huddersfield, West Yorkshire. The film crew have done a fabbatastic job in creating an evening tribute night scene with blacked-out windows, etc. The two minute scene took around three hours to film due to the various camera angles, continuity, etc. It’s fascinating and very clever to see now how everything was edited together in the footage shown in the series.

It was great to meet Sarah Lancashire who was just as lovely in real life as she is on-screen. Sarah complimented the band on making the three hours of filming in the restaurant such fun.

The band would like to thank everyone at Grappolo Italian Restaurant in Huddersfield and all the TV production crew for looking after us so well throughout the day.

You can view the episode via BBC iPlayer website link below:
http://www.bbc.co.uk/iplayer/episode/b073h146/happy-valley-series-2-episode-5

The link only valid for 30 days and this episode contains some strong language. 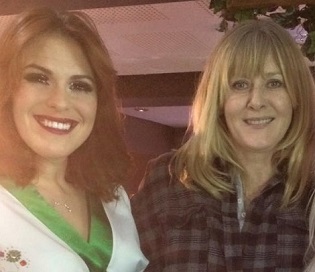